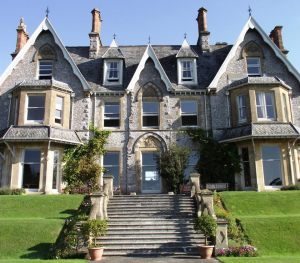 For the first time in its history the Catholic Archives Society travelled to the South West of England, to the delightful county of Devon, for the 2008 Annual Conference. The meeting was held from 19 to 21 May in Brunel Manor, Torquay, home of the celebrated Victorian cival and marine engineer, Isambard Kingdom Brunel.

Two of the papers delivered at the Conference appear in full in the current edition of Catholic Archives: viz: Father Kristian Paver’s presentation on the relationship between Civil and Canon Law in terms of Data Protection and the associated legislation now on force in the United Kingdom (a synopsis of which appeared in the CAS Bulletin 32, November 2008): and Sarah Stanton’s talk on how to ensure security in archival repositories.

Given that the Society was meeting in the South West, it was entirely appropriate that delegates were treated to Abbot Aidan Bellinger’s highly informative and most entertaining account of the post-Reformation (1556-1850) history of Catholicism in that part of England.

A further session was taken up with a very interesting presentation on disaster planning by Rebecca Saunders of the Devon Record Office.  Indeed, it was to that repository, now housed in state-of-the-art facilities on the outskirts of Exeter, that a visit was made on the afternoon of 20 May.  Members were given an extensive tour of the building and were introduced to the different departments of the DRO, including the conservation studio and the searchroom with its library, as well as the archive stacks and storage area.

The final paper was given by Paul Shaw on the Central Congregational Archive of the Poor Servants of the Mother of God, in which he outlined the life and work of the Foundress, Frances Margaret Taylor, and then focussed on the Congregation’s principal archive and its development and collection policy.

The Annual Conference, which as usual included the Annual General Meeting of the

Catholic Archives Society and an Open Forum at which members were able to raise issues of mutual interest and concern, was a memorable occasion, made all the more so by having been convened on the ‘English Riviera’ at a time of year when the climate and spectacular sea views of that part of the world were at their best.

It was also a pleasure to welcome Bishop Budd of Plymouth to the opening session of the Conference.

The Catholic Archives Society is committed to protecting your personal data and using it in line with all data protection regulations. For further information on the use of your data collated from this website, please read the full notice here